What is computer coding and programming?

Computer coding is a specific set of instructions written by a programmer that a computer carries out. Sequential activities help children learn different aspects of coding.

This game teaches children about algorithms. Algorithms are a group of specific instructions written by a programmer to tell a computer what to do. Children will also learn the concept of debugging, which is how to fix a problem in a program.  In this game, teachers or parents can design a path for the mouse using a deck of playing cards and placing some treats for him throughout the path. 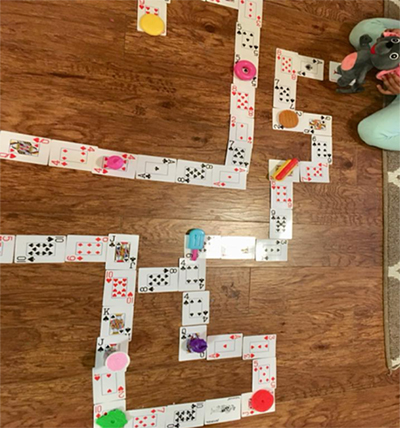 The objective of the game is to move the mouse through the path without missing any of the treats on its way.

One child acts as the Computer (he is the person that moves the mouse by listening to the programmer’s instructions).  The other child acts as the Programmer (the person who gives the commands). The Programmer gives verbal instructions like 'Move Forward' (state how many card spaces), 'Move Backward' (state how many card spaces), and 'Turn Right' or 'Turn Left' to guide the computer/mouse throughout the path, without missing any of the treats.

The challenge level of the game can be increased by creating a more complex maze and putting obstacles in pathways that the mouse has to escape from or maneuver around.

This activity introduces the binary system, which is the language that computers understand, to anyone who can count.

Step 1: Cut out the cards on your sheet and lay them out with the 16-dot card on the left. Make sure the cards are placed in the exact same order.

Step 2: Now flip the cards so exactly 5 dots show—keep your cards in the same order!

This activity introduces children to the conditional statements (If/Then Statements). A conditional statement tells the computer to execute a set of action depending on a specific event.
The objective of the game is to follow the programmer’s instructions and perform a particular task. 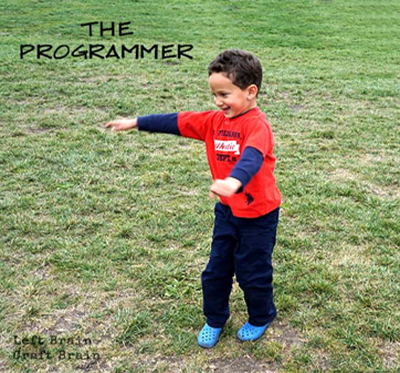 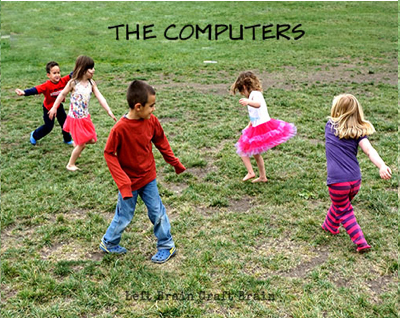 This Game can be played in different sets of rounds, such as three rounds per child. Everyone can take a turn being the programmer.

This activity is a "hacked" version of the previous activity. Hacking is another concept used in computer science. It means modifying or altering the system. With a few changes to the “If/Then Backyard Game," we can design another exciting unplugged coding game. 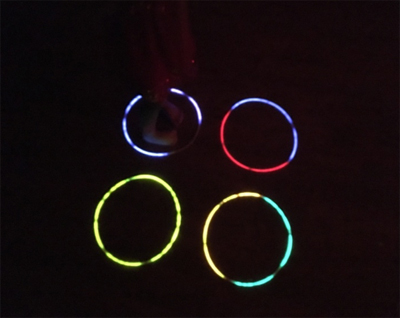 Step 1: Spread the glow in the dark necklaces in a dark room, in any fashion (grids or circles).
Step 2: One Child acts as the Programmer and other children act as the computers.
Step 3: The programmer will give certain instructions (events) that will cause the computers perform specific actions.

You can also add unrelated events to the game. For example, if the Programmer taps his feet once then the Computers will run to the blue rings. For two taps run to the green rings and so on.
With a group of kids, you can add an elimination challenge to this game. If the commands aren’t followed correctly then the Computers will have a 'bug' and can be eliminated from the game. The last computer standing wins.

5. Build Your Own Robot

This unplugged activity teaches children two very basic concepts of coding: algorithm and sequence. An algorithm refers to a set of step by step instructions for performing a task. A sequence refers to the order of steps in an algorithm.

The objective of this game is to build a Lego figure (robot) correctly while only listening to the Programmer’s verbal instructions. 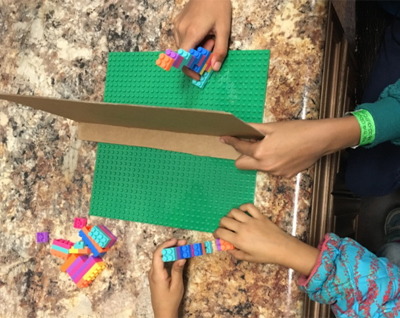 Step 1: Build a Lego figure using the Lego bricks.
Step 2: Make the two kids sit opposite to each other on two ends of the desk. Place the partition wall or the cardboard piece in the middle of the desk. Give the completed Lego figure to one child (the Programmer) but make sure that the other child (the Computer) doesn't see it.
Step 3: Give the desired pieces of Legos to the other child (the Computer)
Step 4:  Then ask the Programmer to give one instruction at a time to the Computer to build his robot.
Step 5: The job of the computer is to build his robot without seeing the model and only listening to the Programmer’s instructions.

If they are unable to recreate the Lego robot with the given instructions, they will realize that there is something wrong with the instructions and need to go back and check them again. This is a key concept of coding called debugging.

The difficulty level of this game can be increased by giving the Computer more than the desired Lego pieces. The computer has to choose only the desired pieces and reject the undesired pieces according to the Programmer’s instructions.

6. Create Your Own Code

Another big concept of coding is the abstract thinking and using symbols to represent specific actions or instructions. This activity helps children to grasp this crucial idea. Assign each letter or number an alternative value; you can use Morse code, Binary Code, or your own symbols. Make the code as easy or difficult as you'd like.

Once you’ve created your code, it’s time for some fun. Leave each other secret messages, or hide a present and leave directions in your code and send your friends or family on a treasure hunt.